Skip to the notes on compiling Emacs

Since my last post, I’ve abandoned spacemacs in favor of building my own Emacs environment. I’ve done this so that I can better learn how Emacs works and to, hopefully, become passably proficient with emacs lisp.

Spacemacs is a wonderful and robust package that served to whet my appetite for discovering what Emacs is all about. Unfortunately, it was too much for me to grok on top of learning Emacs. For instance, I never understood what a leader key is and why I would use that instead of M-x or SPC.

I was dealing with this frustration for nearly a year while trying to learn two complex pieces of software at once, until I found “Play Emacs like and instrument”. This video inspired me to dedicate the time and effort to learn how to make the Emacs experience my own. After all, the ability to completely customize and hack on Emacs is what separates it from other software.

But what about all of the functionality offered by Spacemacs? Happily, this blog post at Bacterial Finches details how to capture the essence of Spacemacs and reproduce it in a way that is my own. I used this as a springboard to learn more about the Emacs package ecosystem, and happily I discovered that all of my favorite functionalityin Spacemacs is tied to discrete Emacs packages.

Configuring Emacs is another blog post for another day - I’ve already rambled too much at this point. If you’re interested, take a look at my emacs configuration.

When I started this process, I was on macOS 10.14.6 with the xcode command line tools installed, but xcode itself was not installed. It is for this reason that the official install manual doesn’t work.

From this initial state, I ultimately had to do the following to compile Emacs on macOS:

I installed XCode from the App Store and then opened it so that it could finish installation. This step was considered done once I was at this screen: 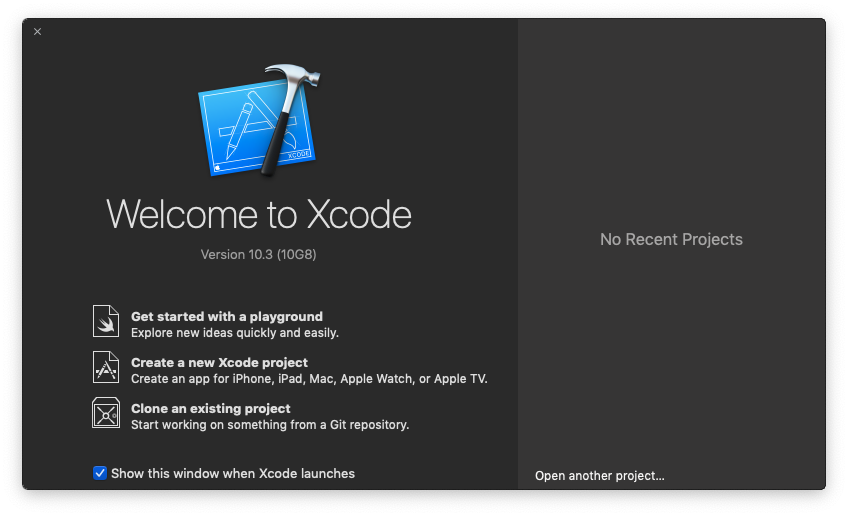 Because I was unable to locate /Library/Developer/CommandLineTools/Packages/macOS_SDK_headers_for_macOS_10.14.pkg as identified in the many google results for this issue, I had to uninstall and reinstall the XCode command line tools after I installed XCode:

At this point, the macOS SDK headers installer package was placed at /Library/Developer/CommandLineTools/Packages/macOS_SDK_headers_for_macOS_10.14.pkg

In the haze of fixing this problem last night, this was a step I performed, but I don’t think it was ultimately required to compile Emacs correctly.

This is another step that I don’t think was ultimately required, but I performed it none-the-less. Including here for reference.

Easiest step in the whole process:

With all of the prerequisites in place, it’s time to configure and make Emacs!

./configure (note that --with-ns is implied when run from macOS)

Test that Emacs is functioning at this point by running src/emacs. If all looks good, run

These were all invaluable references to solve this issue: